The first special issue of the Cine-Excess eJournal examines a film which is, in many ways, peculiar. Due to its intricate production history, the depiction of extreme violence and ensuing problems with several national censorship authorities, the 1970 exploitation movie Mark of the Devil (Hexen bis aufs Blut gequält, Michael Armstrong) has developed a cult reputation that persists till this day. While representing an ideal object for fan appreciation, [1] Michael Armstrong’s film and its paratexts are a perfect area of enquiry pertaining to key debates in film studies such as authorship, production and reception. The interest in Mark of the Devil not only relates to unclear professional responsibilities – a sacked screenwriter assuming a producing and, against the will of the actual incumbent, directorial role – but also to this movie’s truly transnational business set-up: produced by a Munich-based company, backed by German distributor Gloria, shot by a British filmmaker on location in rural Austria, and employing actors, for example, from Czechoslovakia and Yugoslavia. The successful picture, followed by the sequel Mark of the Devil Part II (Hexen geschändet und zu Tode gequält, Adrian Hoven, 1973), acquired notoriety for blatantly sexualised violence. Imaginative marketing devices, such as a sick bag that accompanied the US theatrical release, and Mark of the Devil’s prosecution in Germany and the UK cemented the movie’s reputation as a cult classic. Although not lacking artistic qualities, the production cannot be attributed to the contemporary boom of auteur films usually labelled as Young or New German Cinema. However, film scholars have tended to focus on the nation’s art-house movement at the expense of popular genre product. [2] 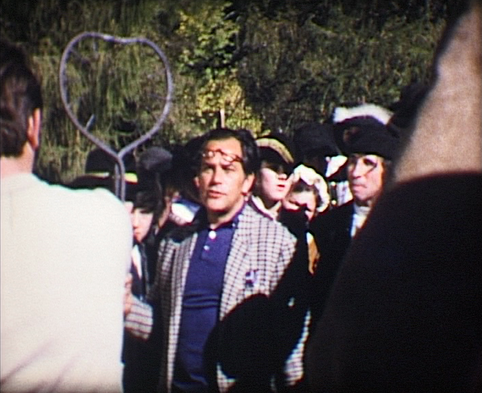 Adrian Hoven and Johannes Buzalski on the set of Mark of the Devil
Mark of the Devil is literally a footnote in film history: [3] most monographs and reference works, regardless of whether they examine Austrian or German cinema, do not mention the movie at all, and it is also absent from more genre-inclined publications. [4] The same applies to the largely unacknowledged status of Michael Armstrong and his work in British film history, although Mark of the Devil’s nature as both a horror film and a formally German production might explain why historians, with a few exceptions, [5] have tended to ignore the movie and the director in accounts of the national cinema. Adrian Hoven, the initiator of the project in the first place, has been treated similarly. If he is mentioned at all, then it is in his capacity as an actor in the German Heimatfilm (homeland film) genre or as a veteran performer from ‘daddy’s cinema’, as cast by Rainer Werner Fassbinder. [6] An encyclopaedia entry betrays the historiographical unease with his versatile filmography: “In the 50s, [Hoven] was the radiant heartthrob in homeland and social problem films. Fassbinder re-discovered him, somewhat matured, as a player of broken characters […]. As a director he shot strangely eroticised crime films during the 60s and 70s.” [7] Obviously, “crime films” is a synonym for all kinds of lowbrow genres to which the originator of Mark of the Devil contributed in various functions in his later career. Equally enlightening, a piece on the Austrian federal state Salzburg as a movie location summarises the negative viewpoint of many historians on genre cinema in general and witchploitation in peculiar: “In the seventies ‘film culture’ […] was at a low point. Spectacular films peppered with nudity blocked the screen, violent films drove the last spectators away”. In an official publication of the city of Salzburg Mark of the Devil is described as “a horror scenario of rape, steaming bowels and muscles torn on the rack” [8] and hence framed as what would later be called torture porn. [9] These quotations exemplify the discomfort of scholars in addressing forms of entertainment that are, at the same time, popular and visceral. The German witch films are thus situated in the interstices of official film history. Due to their lowbrow status and controversial nature, they tend to be ignored in accounts of Austrian, British and German national cinemas, which rely heavily on a consensual canon of works accepted as legitimate. 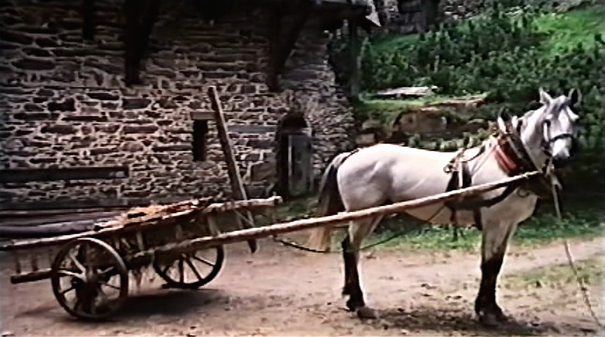 The set of Mark of the Devil Part II
If it is possible to understand Mark of the Devil as too peculiar to be acknowledged in film history, one could also argue that the film is perfectly ordinary. The 1960s and 1970s are commonly regarded as the golden age of European exploitation cinema, and our object of study is a typical result of this trend. Whether we grasp it as a contribution to German popular film with its many different cycles [10] or, like The Bloody Judge (El proceso de las brujas, Jess Franco, 1970) and Inquisition (Inquisición, Paul Naschy, 1978), as an attempt to emulate the British success Witchfinder General (Michael Reeves, 1968), [11] the movie represents a quite common venture by profit-orientated filmmakers. However, a more conservative strand of film studies prefers not to acknowledge that, within a national cinema, it is perfectly normal for a commercial product like Mark of the Devil to exist alongside recognised art-house wares such as Why Does Herr R. Run Amok? (Warum läuft Herr R. Amok?, Michael Fengler/Rainer Werner Fassbinder, 1970). It is thus quite appropriate to try to overcome this cultural bias and to offer more holistic accounts of film history. Even though this is an argument that prefaces many a study of exploitation cinema, it is still necessary to advance it because of the discipline’s tenacious resistance to devoting itself to popular forms of the moving image that do not possess any kind of highbrow reputation. By taking the German witchploitation films seriously and exploring them from a range of critical perspectives, this special issue of the Cine-Excess eJournal is dedicated to such a revisionist historiographical stance and examines a previously underrated field of film culture at length.

While Drehli Robnik situates Mark of the Devil within a wider history of films dealing with witchcraft that he approaches from a political point of view, Marcus Stiglegger explores how Georges Bataille’s notion of transgression relates (or fails to relate) to the extreme cinema of the 1970s in general and the German witch-hunter films in particular. Deniz Bayrak and Sarah Reininghaus reveal that both Mark of the Devil and its sequel are textually organised according to a surprisingly coherent topological system that places different forms of violence in specific spaces. Theologian Gianluigi Gugliermetto takes the films’ Christian iconography extremely seriously and pinpoints the religious implications of sexualised pain on screen, whereas Bálint Kovács and Judit Szabó analyse the movies from a cognitive perspective to offer a critique of the notion of voyeurism in connection with exploitation cinema. Andreas Ehrenreich investigates the German marketing of Mark of the Devil around its theatrical release, in which the emphasis on excessive violence was used as a means of product differentiation. Examining the situation in the UK and the German-speaking countries, Julian Petley sheds light on the censorship interventions to which both Witchfinder General and Mark of the Devil were subject. The issue concludes with Michael Fuchs’s enquiry into the paratextual afterlife of the latter film, which continues to fuel the authorial conflict between Michael Armstrong and the late Adrian Hoven.

The German witch films might be more than forty years old, but the older they get, the more relevant they seem to become. In recent years there has been significant interest in Mark of the Devil. A restored German DVD and Blu-ray edition was published in 2012, and the University of Vienna’s conference from which all of our articles emerge followed in 2014. [12] It was astonishing to see that the movie could still cause a stir after all these years. After worrying about its controversial nature and its banning in Germany, one of the institutions involved wanted to withdraw significant funding shortly before the conference was due to take place. Fortunately, it could be convinced to do otherwise. In 2015 the first uncut Blu-ray edition was released in the UK. And in the same year, curator Paul Poet’s retrospective “Aus Fleisch und Blut: Austrian Pulp – Genrekino aus Wien und Anderswo” (“Of Flesh and Blood: Austrian Pulp – Genre Cinema from Vienna and Elsewhere”), which contained both Mark of the Devil and Mark of the Devil Part II, was shown at the Filmarchiv Austria as part of Viennale, the Vienna International Film Festival. In the same series Martin Nechvatal’s feature-length documentary Hexenjagd in Mauterndorf (Witch Hunt in Mauterndorf), which re-examines both movies’ production histories and contains previously unseen behind-the-scenes material, received its premiere. In 2016 the German home-video distributor of Michael Armstrong’s film finally managed to get the ban on its distribution revoked.

​In addition to the low esteem in which it was held, the decades-long restricted accessibility of Mark of the Devil may have contributed to its previous invisibility in film history. We hope that this Cine-Excess special issue will compensate for this and provide acute analysis of what makes the German witch films so very alluring to this day. Even though film studies have made a great deal of progress in the exploration and appreciation of disreputable cinema since the turn of the millennium, there is still a long way to go until this field of research will be accepted unreservedly.
Footnotes
Download Article